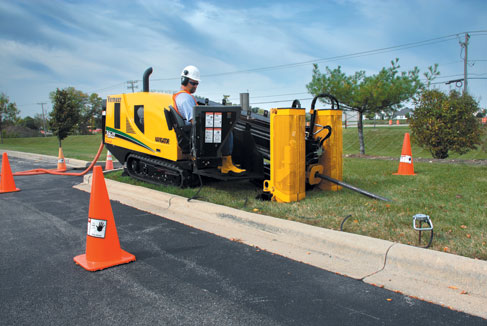 Horizontal Directional Drilling (or HDD) has become the preferred method for underground installation of:

The process starts with receiving hole and entrance pits. The first stage drills a pilot hole on the designed path, and the second stage (reaming) enlarges the hole by passing a larger cutting tool known as the back reamer. The driller increases the diameter according to the outer diameter or the conduit and to achieve optimal production. The third stage places the product or casing pipe in the enlarged hole by way of the drill stem; it is pulled behind the reamer to allow centering of the pipe in the newly reamed path.

Horizontal directional drilling is done with the help of a viscous fluid known as drilling fluid. It is a mixture of water and, usually, bentonite or polymer continuously pumped to the cutting head or drill bit to facilitate the removal of cuttings, stabilize the bore hole, cool the cutting head, and lubricate the passage of the product pipe. The drilling fluid is sent into a machine called a reclaimer which removes the drill cuttings and maintains the proper viscosity of the fluid. Drilling fluids hold the cuttings in suspension to prevent them from clogging the bore.

Location and guidance of the drilling is an important part of the drilling operation, as the drilling head is under the ground while drilling and, in most cases, not visible from the ground surface. Uncontrolled or unguided drilling can lead to substantial destruction, which can be eliminated by properly locating and guiding the drill head. There are three types of locating equipment for locating the bore head: the walk-over locating system, the wire-line locating system and the gyro guided drilling, where a full inertial navigation system is located close to the drill head.

Is Horizontal Directional Drilling Right for Your Project?

Contact us today to discuss your project and see if HDD is the best option for you.